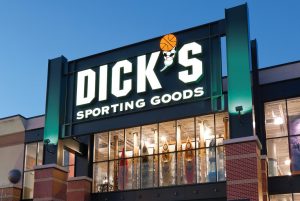 Dick’s Sporting Goods (NYSE:DKS) failed to grow first-quarter same-store sales as much as Wall Street was expecting, as the company is grappling with intense online competition and declining interest in golf. Same-store sales grew 2.4 percent for the quarter, missing an analysts’ estimate of 3.5 percent growth. For the full year, Dick’s projected same-store sales to rise 1-3 percent, a decline from last year’s 3.5 percent.

Net income was $58.2 million in the three months ending April 29, compared with $56.9 million in the same quarter a year ago. The retailer posted earnings of 54 cents per share adjusted on sales of $1.83 billion for the first quarter. Analysts were expecting earnings of 54 cents a share on sales of $1.84 billion, according to consensus estimates from Thomson Reuters.

Dick’s warned it is facing a “challenging retail environment” as the sporting goods retailer struggled to increase sales. Shares of the stock dropped more than 10 percent after the announcement, heading for its biggest single-day decline in three years. Trading volume more than doubled its average daily rate. Shares of Dick’s have fallen roughly 10.5 percent for the year-to-date period, but are up over 19 percent over the past 12 months.

The company is now focused on cutting costs and streamlining operations. CEO Edward Stack said in a statement that the retailer continues to “evaluate and adjust” its business model. In the second quarter, Dick’s expects to record a pretax charge of roughly $7 million related to costs associated with the elimination of employee positions, primarily at its central support center. A company spokesperson was not immediately available to provide additional details on the job cuts.

The company said it will still move ahead with its plans to open new stores. Dick’s plans to open about 43 new stores this year, including 15 big-box locations, eight Golf Galaxy stores and two Field & Stream locations that already opened in the first quarter. The company also plans to relocate another six stores. The Coraopolis, Pennsylvania-based company currently operates more than 690 Dick’s stores, nearly 100 Golf Galaxy stores, and about 30 Field & Stream stores.

The company also plans to improve its online business and merchandising strategy. Dick’s said that it revamped its website earlier this year and that appears to have improved sales. The company’s chief marketing officer, Lauren Hobart, was recently promoted to president and will oversee stores and customer and digital operations.

For the current quarter ending in August, Dick’s expects its per-share earnings to range from $1.02 to $1.07. Analysts had forecast adjusted earnings per share of $1. The company expects full-year earnings in the range of $3.65 to $3.75 per share.