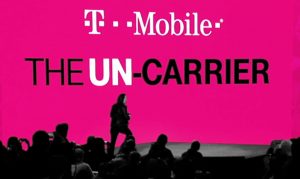 T-Mobile (NASDAQ:TMUS) reported mixed results for the first quarter of its fiscal year. The company had $9.55 billion in revenue in the period ended March 31, missing analyst expectations of $9.62 billion. Its net income was $698 million, or 80 cents per share, for the quarter. In the same quarter of last year, the company reported net income of $479 million, or 56 cents per share. On an adjusted basis, T-Mobile’s earnings were 48 cents a share for the quarter. Analysts, on average, forecast earnings 34 cents a share.

T-Mobile announced that it added more subscribers than expected in the first quarter. T-Mobile added 1.1 million new customers: 914,000 post-paid customers, including 798,000 who used a phone, and 386,000 pre-paid customers. T-Mobile estimates it captured 250 percent of the subscribers in the period, which suggests its rivals lost customers.

Verizon posted its first-ever loss of post-paid customers Thursday. Verizon said it lost 289,000 post-paid phone customers, and 307,000 in total, making it the worst period for customer growth for the company. T-Mobile CEO John Legere said in an interview, “They haven’t gained any customers since 2015, and they haven’t grown service revenue since 2014. So I think Verizon’s got some real problems, and one of the biggest ones is, of course, T-Mobile.” AT&T reports results on Tuesday.

T-Mobile’s customer growth during this period underscores the momentum behind the “Un-Carrier” movement. In August, the carrier first unveiled its decision to remove all of its plans in favor of a single unlimited option called T-Mobile One. The backlash started almost immediately, with some customers complaining that they would be forced into a pricier plan and others upset about the lack of options. T-Mobile initially let people choose its existing plans for a few months, but went all in on its unlimited plan in January.

The company also announced that it is open to merger talks after a federal ban expires this week. Merger talks among telecommunications companies were barred for over a year as the U.S. Federal Communications Commission conducted a $19.8 billion auction of airwaves for wireless use. Legere said T-Mobile got “the motherlode” of spectrum in the auction and the company now has significantly more low-band spectrum per customer than any major provider. The quiet period for merger talks will end on April 27, the same date that downpayments are due from the winners of the auction.