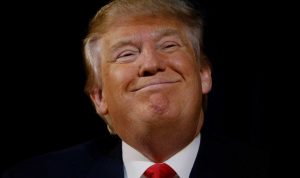 President Trump has signed three executive orders to spark reviews of tax and financial regulations so taxes on businesses and individuals can be cut. He has pledged that the tax cut in total would be the largest in U.S. history. Part of the plan is a drastic cut in the corporate tax rate.

The president has instructed advisers to propose cutting the corporate tax rate from 35 percent to 15 percent. The reduction is larger than what House Republicans had proposed in their own plan. The House’s tax plan proposed a 20 percent corporate tax rate.

The United States has one of the highest corporate tax rates in the world at 35 percent. However, a wide variety of deductions in the tax code help most companies pay a much lower effective rate. Businesses are projected to pay $340 billion in corporate taxes in 2018, roughly 10 percent of all revenue collected by the government.

The rate reduction that the president is backing could cost the federal government $2.4 trillion over a decade, say independent budget experts. Some are saying that a corporate tax cut that drastic is likely to grow the national debt and increase federal borrowing. His advisers have said that the economic growth the tax cuts will stimulate will make up for any shortfall in revenue. Treasury Secretary Steven Mnuchin said, “The tax plan will pay for itself with economic growth.”

Any changes to the tax laws would have to be backed by Congress. Passing a tax cut plan that widens the deficit would be virtually impossible without bipartisan support on Capitol Hill. Curbing the deficit is a top national priority for Republicans. There have also been many Democrats who have already said they will not support such a plan.

Getting any big tax cut through would most likely require raising other revenue or finding budget savings. A House Republican tax plan endorsed by House Speaker Paul D. Ryan that would impose a new tax on imports is expected to raise nearly $1 trillion. However, opposition from industry groups has been vocal and the White House appears to have moved away from taking that direction.

Trump has been pledging for months to make drastic changes to the tax code. Advisers said Trump is eager to make a mark on a top issue before the 100-day anniversary of his administration after the failure to advance legislation to replace the Affordable Care Act. Several House Republicans close to Ryan expressed concern about Congress piling up too many issues in such a short amount of time. Capitol Hill has also revived efforts to pass a health-care overhaul and is working to keep the government funded while under pressure to funnel money toward border security projects.