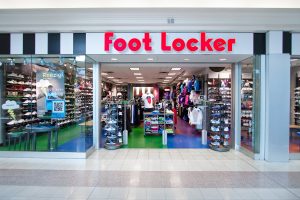 Foot Locker Inc. (NYSE:FL) missed analysts’ estimates for its first-quarter results, sending its stock on its worst decline in more than eight years. Foot Locker reported first-quarter earnings of $180 million, or $1.36 a share, lower than the $1.38 predicted by analysts. In the same quarter of last year, the company reported earnings of $191 million, or 1.39 a share. The company posted sales of $2 billion in the period, missing the average estimate of $2.02 billion.

The company claims that the lag in consumers receiving their tax refunds hampered results for February, typically one of the biggest months of the year for Foot Locker. The company reports that its same-store sales plummeted by a percentage in the low teens during the month. Wal-Mart Stores Inc., Advance Auto Parts Inc., L Brands Inc. and Ross Stores Inc. have also cited delays in tax refunds as a factor in their most recent results.

Chief Executive Officer Dick Johnson said in a statement, “The first quarter was one of our most profitable quarters ever, but it did fall short of our original expectations.” The company said it had much stronger sales in March and April, but it was not enough to fully offset the decline in February. Johnson said in his statement: “We are confident that our customers have not lost their tremendous appetite for athletic footwear and apparel and that our position in the industry is stronger than ever.”

Foot Locker was the biggest decliner in the Standard & Poor’s 500 Index Friday. The shares fell as much as 17 percent shortly after market open, dropping to $58.13 in the biggest intraday plunge since November 2008, during the financial crisis. The stock rebounded briefly earlier in the year in a rally sparked by optimism over the company’s strong April sales data. As of Thursday’s close, shares of Foot Locker are down less than 1 percent for the year-to-date period.